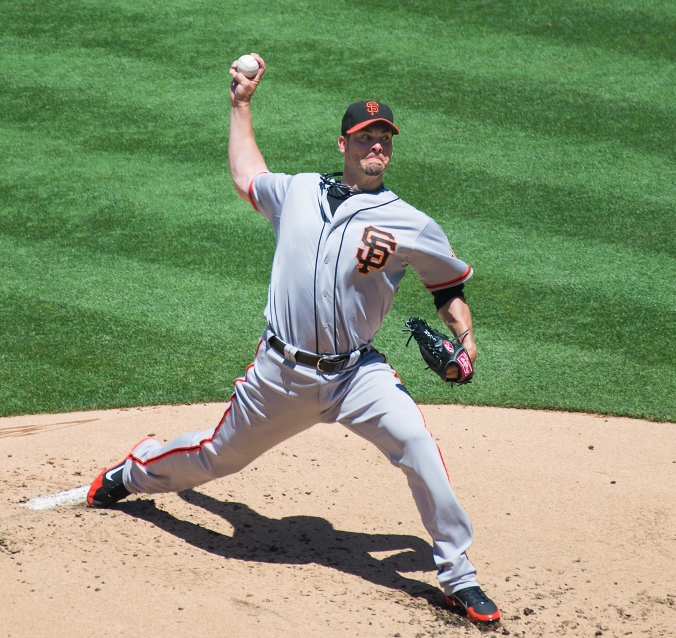 Vogelsong was drafted in the 5th round of the 1998 amateur draft by the San Francisco Giants.  Two years later, he made his major league debut at only 22 years old.  His young career was off to a great start.

The 2001 season, however, didn’t go so well.  After compiling an 0-3 record and a 5.65 ERA, Vogelsong was traded to the Pittsburgh Pirates in the deal that brought All Star pitcher Jason Schmidt to the Giants.  The year finished worse than it had started, as Vogelsong only managed to last 6 innings over his 2 starts, compiling an 0-2 record and a 12.00 ERA.  He spent most of the next two seasons playing minor league ball in Pirates organization.

In 2004, Vogelsong got another chance to prove himself.  But, in 31 appearances (26 starts) he compiled a 6.50 ERA.  For the next two seasons, Vogelsong pitched out of the bullpen.  That appeared to be the end of his major league career.  He spent the next three seasons pitching in Japan, and split 2010 between the minor leagues and Venezuelan league.

While he was in Venezuela, Vogelsong met two very important people; San Francisco Giants hitting coach Hensley Meulens and Giants minor league instructor Guillermo Rodriguez.  The two coaches saw a changed man and a better pitcher than the pitcher who last played for San Francisco nine years earlier.  Rodriguez called the major league organization and encouraged them to bring him on board as an emergency starter who could be stashed at Triple-A.

Sure enough, in April, 2011, Giant’s pitcher Barry Zito suffered an injury, and emergency backup Ryan Vogelsong was called up.  He never looked back.  He went 13-7 with a 2.71 ERA, which earned him a spot on the National League All Star Team for the first time at age 33.  He’d go on to pitch out of the Giants rotation over the next 4 seasons, winning 2 World Series rings with the team.  His Giants career came to an end in 2015, at which point he signed once again with the Pittsburgh Pirates.

Vogelsong’s Christian faith played a key role in helping him keep it together through the trials and tribulations of his career.  He has a profound trust in God and deep love for the Bible.  At the Giant’s annual Faith Day in 2014, Vogelsong chose to talk about the Bible;

“It’s so funny to me that we have this great book, the Bible, and it tells us exactly what we need to know.   If you pick it up and you read it and take time to understand it, it tells us so many things in there about what we need to do.  And He tells us, all we have to do is pray and be thankful and He’ll give us whatever we need.  And it might not be without trials and tribulations and ups and downs. But at the end of the day, if we’re faithful and we believe, it’s gonna be there.

You know, we have all these apps now you can pull up an app and figure out how to cook a turkey for Thanksgiving dinner.  You know, there’s book, how to do this and how to do that.  I just think it’s funny because the Bible’s been doing that forever!  You know, it’s been the guide [to] tell us what to do forever.  And I put a couple of verses down here that I go to a lot when things aren’t going good, when things are going good.

And there’s a couple that I go to pretty much before every game.  Before I walk out on the field, one of the last things I do is pick up my phone.  My teammates probably think I’m texting my wife or something, but I’m reading Bible verses.  And it’s funny because, all these, what I’m saying is all these verses are in the Bible.  All you have to do is look them up.  They’re right there.

The first one that I love; Isaiah 41:10; So do not fear, for I am with you.  Do not be dismayed, for I am your God.  I will strengthen you and help you.  I will uphold you with My righteous right hand.  I mean, that speaks to you that He’s gonna be for there and hold you up no matter what.

Then, Isaiah 41:13.  For I am the Lord your God who takes hold of your right hand and says to you.  Do not fear I will help you.  Anything that you’re going through, anything, He’s there.  All you have to do is trust and believe and ask Him for your help.

Then, Philippians 4:13.  I can do everything through Him who gives me strength.  2012 World Series, people, I prayed that every single day.

Then the one – the best one of all, Luke 1:37. For nothing is impossible with God.

Pick up that Bible and read it and let your heart open up because He will guide you.  He guided me and I’m so happy I opened it up again.”

If you would like to watch the video of Vogelsong’s speech at the August 16, 2014 Fellowship Day at AT&T Park, follow the link here