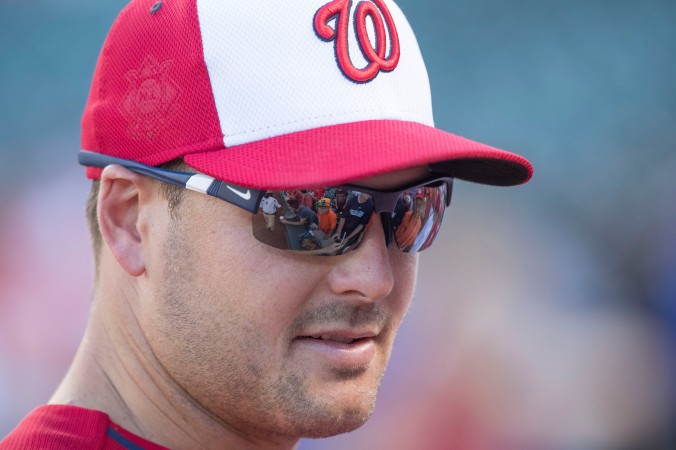 But for National’s outfielder Chris Heisey, life hasn’t always been glorious.  He has a different word he uses to describe his roots; humble.

Chris Heisey considers himself to be a regular kid from a regular family.  He grew up in Mount Joy, PA and was the son of two loving Christian parents, Craig and Linda.  Heisey says of his childhood in an interview with Beyond the Ultimate; “I grew up going to church every Sunday.  Ever since I can remember, even when I’d wake up to go to school, my mom would have a Bible verse on the table with the Bible flipped open.  So it was a non-stop reminder of who I was living for, and how to represent Christ as I was going to school or going to hand out with my friends.”

Growing up, sports always played a large role in Chris’ life.  “I had a bat in my hand when I was about two years old, and my parents were a big part of introducing me to sports and being active.”  Chris played baseball in high school and was the top player on his team, but he never really caught anyone’s attention.  He didn’t receive any Division I scholarship offers.  He wasn’t attracting big league scouts.  A career in baseball wasn’t even on his radar.

Instead, Heisey planned to go to a nearby Christian college, Messiah College.  He hoped to play baseball while he attended school, graduate, and become an elementary school teacher.  Seeking the glory of Major League Baseball wasn’t even on his radar.

It was Heisey’s best friend and college teammate who had the big dreams.  He wanted to make it to the majors and play for the Padres.  He went to open tryout camps the summer after he and Heisey’s freshmen year to try to garner some attention from pro scouts.  Heisey went along with him.

The following summer, Heisey learned that he’d been drafted by the Cincinnati Reds in the 17th Round of the 2006 Amateur Baseball Draft.  Heisey recalls; It was a shock; I didn’t expect it to happen.  It was something I prayed about, and felt like I might not get the opportunity ever again to go after this dream.  I decided, ‘Hey, this may end up working out.  I may get to play in the big leagues.’  He added in an interview with Steve King for his Messiah College newspaper; “You have [to] work hard and keep Christ as your focus.  To be honest, I didn’t’ think I had much of [a] shot to be an MLB player, but I continued to work hard.  If you fall short, you’ll still end up in a great place with Christ as the center.”

Just like his amateur career, his minor league career got off to a humble beginning.  He was far from appearing on Baseball America’s top 100 prospect lists.  He didn’t even appear on Cincinnati Reds top 30 lists.  He flew under the radar for several seasons in the lower levels of the Reds organization.

That all changed in 2009.  Heisey hit a combined .314 with 22 home runs, 77 RBIs and a .900 OPS.  His performance led him to win the Sheldon “Chief” Bender Award as the Reds minor league player of the year.  In 2010, Heisey’s distant dream of becoming a Major League baseball became a reality; from humble beginnings to the big show.

But one thing that never changed was the humility.  Throughout his career, Heisey has been continually complemented on his character.  Jamie Ramsey of mlb.com says of him; “He’s an honest and wholesome man, a man of God, who feels he can also do better in life.  Humble, yet competitive, Heisey has the qualities of a Frank Capra character- a role model, not just for kids, but for adults alike.”  When Heisey was playing for the Reds, the Red Reporter blog informed their readers that “aside from his still-emerging talent, Reds fans should feel privileged to root for Heisey, who exudes humility and class.”  Even Heisey’s High School basketball team bus driver had the desire to chime in; “Chris is such an inspiration to all who know him… not because he is a major league baseball player, but because he is a good man, [and an] awesome son who helps his mom every chance he gets… [a] devoted husband to his wife Lisa and great friend all around.  His humble attitude is real folks… what you see is what you get with Chris… They don’t come any better!”

Humility is important to Heisey.  He told Beyond the Ultimate that one of his favorite Bible verses is Philippians 2:3-4; Do nothing from selfish ambition or conceit, but in humility count others more significant than yourselves.  Let each of you look not only to his own interests, but also to the interests of others.  He explains; Being humble is something that we’re called to do.  It’s pretty easy for me not to have a ‘big head’ because I’m just Chris Heisey, the same guy who was going to college to become a school teacher.  Just because I happened to get lucky and worked hard and got to the big leagues doesn’t mean I need to change that.”  Deep down, Heisey feels like the same guy he was when his baseball life humbly began in Mount Joy, PA.  He told Messiah College Assistant Athletic Director Cory Furman; “I’m not good at estimating, but I figure I’ve signed over 15,000 autographs during all of this.  I just don’t understand why anyone would want my autograph.  Because I can hit a ball?  It seems to me we should be getting the autographs of teachers, who make a difference to so many people, or doctors who save peoples’ lives.”

It’s easy to get caught up in the quest for glory.  Chris Heisey sets a beautiful example for us that we should all strive instead to be humility.  After all, that’s what Jesus did.  Philippians 2 goes on to say; Have this mind among yourselves, which is yours in Christ Jesus, who though He was in the form of God, did not count equality with God a thing to be grasped, but emptied himself, by taking the form of a servant, being born in the likeness of men.  And being found in human form, He humbled Himself by become obedient to the point of death, even death on a cross.   That’s humility.  Jesus did nothing for His own glory, but gave up everything to save you!  May we all live for others as Jesus lived and died for us!