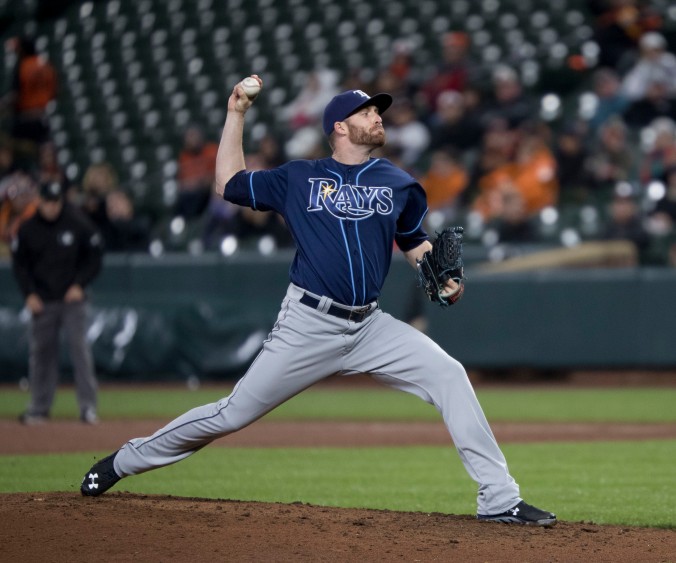 It’s the end of July.  That means it’s the heart of the Major League baseball season.  For many of you it’s summer vacation time.  And for others of you, this time of year is best described by 3 little letters; V.B.S.

For Christians across the country, it’s a week of decorating, dressing in goofy costumes, preparing snacks, and coming up with creative object lessons and classes.  If you’re like me, it’s a week in which your normally healthy diet is replaced with Oreo Cookies and pizza.  Sleeping gets replaced with feverishly planning for the next day.  The whole time you hope and pray it makes a difference.

It made a difference for Tampa Bay Rays reliever Chase Whitley.

Whitley told Unashamed Athletes; “I accepted Christ as my Savior when I was 9 years old at Vacation Bible School.  The message was on the verse John 3:16; “For God so loved the world that He gave His only begotten Son that whoever believes in Him will not perish, but have eternal life.”  “I felt God tell me at that very moment it could be the difference between me going to Heaven or Hell.  When the message was over, I went down and accepted Christ as my Savior.  I thank God that He saved me at such a young age.  With Christ as my side, He battled the temptations of adolescence for me.  When the temptations got too much for me, there is no better person to fight off the Devil than the God of the Universe.”

But can hearing a Bible Verse at Vacation Bible School as a child really change your life?

God had helped Whitley resist temptation as an adolescence, but the challenges weren’t nearly over yet.  After graduating High School, Whitley enrolled in junior college, where he had freedom for the first time.  Would he embrace the faith his parents taught him?  Would he follow their paths or choose something different?  Would he do the right thing or would he go wild?  He found himself really wrestling with those questions for the first time.

But God was still at Whitley’s side, helping him fight off the temptations.  “I could have gone wild, but thank be to God, He used this time to develop my faith in Him.  I am so thankful He did.  I began reading His Word daily and grew more in those two years than ever before.”

The temptations, though, kept coming.  After two years of growth in junior college, Whitley transferred to Troy University, where he faced more temptations.  But again, God surrounded him with good Christians and he dedicated himself to baseball and Bible study and walking in God’s path.

In 2010, Whitley was drafted in the 15th Round by the New York Yankees.  He moved to Staten Island to begin his career.  “Being from a small town, Staten Island was a major test for me.  I was completely outside of my comfort zone being in one of the biggest cities in America.  However, God gave me a peace and direction while I was there to be a missionary through the game of baseball.  I don’t beat people over the head with my faith, but if God creates an opportunity to share, I pray I will always have boldness and wisdom to speak up for His Name.”

Proverbs 22:6 says; Train up a child in the way he should go; even when he is old, he will not depart from it.”  Whitley is a great example of that.

So, whether you’re a parent, a teacher, or a sleep-deprived VBS volunteer, think about the story of Chase Whitley.  The work you do makes a difference.  God makes the seeds you plant grow.  The impressions that God makes through you can last a lifetime!