A quick note: I was born in Philadelphia.  Needless to say; I have been a diehard Eagles fan for over 30 years now.  As the Eagles prepare for Super Bowl LII, “A Lamp unto My Cleats” is going to shift our focus for the next week or so.  Instead of looking at the game of baseball, we’ll talk about football; taking a look at some of the stars of the Philadelphia Eagles, their stories of faith, and their favorite Bibles.

Before we look at their players, there’s another person you’ve come to know over the years if you’ve followed the Eagles – Garry “G” Cobb. 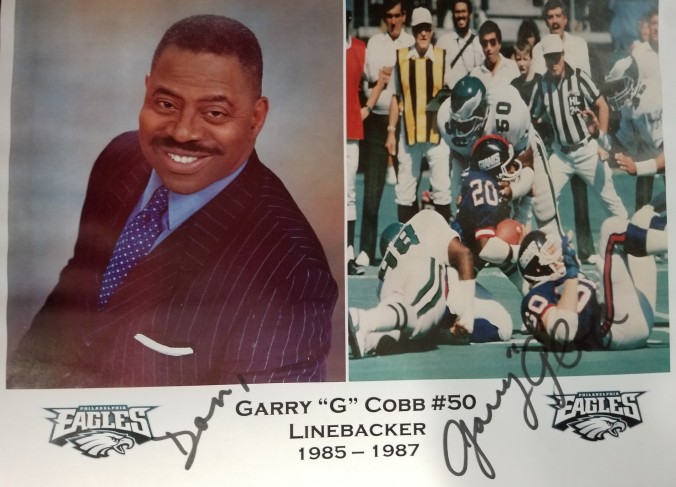 Garry Cobb met with fans and signed photos prior to and Eagles game at Lincoln Financial Field (Thanks to my Dad for having him sign this for me!)

Garry Cobb, affectionately known as “G,” was drafted by the Dallas Cowboys out of USC in the 9th Round of the 1979 draft, though he was waived prior to the start of the season.  He signed as a free agent with the Detroit Lions, and remained with them through the 1984 season.  Prior to the 1985 season, he was traded to Eagles for legendary running back Wilbert Montgomery.  While with the Eagles, he played alongside Jerome Brown, Clyde Simmons, Seth Joyner, and, the minister of defense himself, Reggie White.  Prior to the 1988 season, he signed once again with the Dallas Cowboys until knee problems ended his career in 1989.

After his playing career, Cobb transitioned into radio.  He became a popular sports talk show host on Sportsradio 610-WIP in 1991, where we quickly became a Philadelphia fan favorite.  He also worked as a sports anchor and reporter on CBS-3 television in Philadelphia for nearly a decade.

While many younger sports fans may not know the name ‘Garry Cobb,’ he has become a bit of a legend in Philadelphia.  He’s known for his infectious smile, his passion for life, his loving heart, and his constant desire to help people.  Those characteristics make him the perfect match for his current job.  Cobb works as an NFL Legends transition coach for NFL Player Engagement.  That means that he works with former NFL players, helping them adapt to life after the NFL.  The job, though, is really larger than that.  As Cobb explains on the NFL Player Engagement website, “You’re not just dealing with the player.  You’re dealing with his wife, his family. When a player retires or gets released, his wife and family retire or get released, too. And that’s the difficult part. That’s where problems happen.  We do whatever we can to help.  We’re not counselors, but if we think a player, or his family, needs counseling we tell them. And for the most part they’ll listen to us, because they know we played. We went through the same things…  I love what I’m doing.  I really do. I’m giving advice to guys and helping guys. That’s all I ever wanted to do.’’

Cobb is a great story-teller.  He uses his own personal experiences to help players.  He’s got the type of charisma where, when he talks, you can’t help but want to listen.  But there’s another topic that Cobb loves to speak about; his faith.

Cobb grew up in a Christian home, where his father served as an influential example of what it means to live for God.  He told Rob Maaddi on the “Faith on the Field show;” “Well, really, I came up in a family… We were in church every week.  And as a youngster, I got saved when I was about 7 years old.  I remember going up because they were preaching that fire and brim stone and I was going like, ‘I know one thing, I don’t want to go to hell!’  So I went up and receive the Lord.  Growing up, my mom and my dad, they lived the kind of life where they loved the Lord…  The big thing about my dad is, 1st of all he lived what he preached in front of us, meaning, like, I never heard my dad curse… It was always God first… I’ve never really seen him look lustfully at another woman…  I think about my mom and my dad’s relationship; it was like they were together, and you never even thought about them not being together – there was never even a discussion or anything – and so that gave me that foundation.”

Just because he was raised in a good Christians home, doesn’t mean that young Garry Cobb didn’t struggle with his faith.  He explains; “But really, though, I had one foot in and one foot out, you know?  I wanted to be the man at the same time, you know; out, be cool, have ladies, and be successful and everything, and that’s really what my mind was.  But when I went to college, see, I met a young lady who is now my wife and everything.  But, you know, she got pregnant when we were out there and, really, I had some decisions to make. And really, what happened from that time, I really got serious about my relationship with the Lord because I really knew I needed to because I wasn’t ready to be a dad.  I was not ready to be a husband.  I wasn’t ready to live the kind of life I saw my father did in front of us and everything.  So I knew I got to get serious about it.  So, thankfully, I found a good church. I started finding out that God cares about us…  He’s got a purpose for our lives…  We can put all of our trust in His Word and know that He will help us…  And So, I’m able to really be the kind of person and grow and be the father that God wants me to be.”

While Cobb is growing as a man of God, he also knows that he’s still far from perfect.  He says; “at the same time, I know that there are times when I have to look in that mirror and say, ‘you have to straighten up there, young fellow’ and ‘we got to take this to another level…’  He will walk with you and He will take His time with you.  I mean His patience – it’s just ridiculous how good His patience is and how long it is.”

Garry Cobb learned how to be a man of God by watching his father.  Now, he dedicates his life to showing others how to live and helping them make the most of their lives.  Peter told young Timothy in 1 Timothy 4:11 to set the believers an example in speech, in conduct, in love, in faith, in purity.  That’s God’s charge to us as well.  We’re called to look at the life of Jesus – the way He loved, the way He lived, and the way He sacrificed Himself for us – and strive to give thanks for what He’s done for us by living as much like Him as we can.  None of that earns us a place in heaven – Jesus already did that by dying on the cross for us.  Instead, we strive to honor God and the sacrifice that Jesus made for us in the how we live, all with the hope that others will come to know Him through us.

I strongly recommend listening to the entire interview with Cobb and listening regularly to Rob Maaddi’s Faith on the Field show.