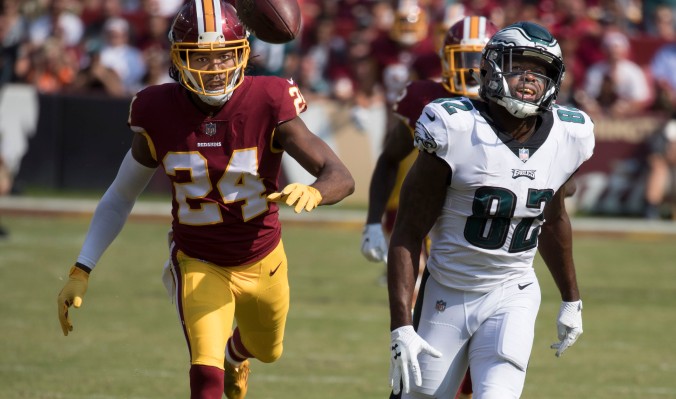 Torrey Smith didn’t have it easy.

Smith was born on January 26, 1989 in Richmond, Virginia.  His mother, Monica, became pregnant with him when she was only 15 years old – his father was 25.  When Smith was born, he was ill with meningitis and jaundice, and weighed only 5.6 pounds.  His first 10 weeks were spent in an incubator, fighting for his life. It wasn’t easy, but tiny Baby Torrey pulled through.

Things didn’t exactly get any easier from there.  Over the next 4 years, Monica would give birth to 3 more children.  Raising 4 children before her twentieth birthday was too much to bear, and she needed help.  She turned to the man of the house; 4-yearold Torrey.  He immediately began learning how to prepare food and how to feed his siblings.  He spent his elementary school years changing diapers, doing laundry, and getting his siblings ready for school.  He saw and experienced violence and faced challenges that would be difficult for even a grown man.  But, through it all, In between school and helping raise his siblings, Smith found a place to find refuge, solace, and strength; sports.

It wasn’t easy, but Smith found a way to focus on baseball and football and to achieve great success.  Against all odds, it appeared that he would have the opportunity to attend college.  He was recruited by Division 1 schools including Virginia and Virginia Tech, but he chose Maryland, because it was the closest school to his home north of Fredericksburg, Virginia.  It didn’t take long for the coaching staff at Maryland to realized that they had struck gold.  In addition to having immense talent, Smith was an impressive human being.  Maryland’s coach at the time, Ralph Friedgen once said of Smith; “the good Lord made a perfect person right there.”  But things still weren’t easy for Smith.  During his junior year of college, his mother was incarcerated, and Smith had to help his siblings from afar.

During that difficult junior year, things in Smith’s life began to change.  He said in a video the called “The Locker Room’s Binding Force;” “I went to Bible study, I went to church often growing up, but it wasn’t until I was my last year of College when I realized I was kind of living off of everyone else’s salvation.  Like, I wasn’t really finding out things on my own.  I wasn’t really diving into the word and experiencing that the way I experienced everything around me.  That’s when I realized I was living the wrong way.”

Smith’s newfound dedication to his faith gave him the strength to persevere amidst the challenges.  He had a strong season for the Terps and impressed NFL scouts.  Finally, the summer following that difficult junior year, after a season in which he caught 67 passes, Smith finally caught a break.  He was drafted in the 2nd round of the draft.  And, of all the teams to select him, he was drafted by the Baltimore Ravens – a team close to home.  He played in all 16 games of his rookie season in 2011, catching 50 passes for 841 yards and 7 touchdowns.  He helped the Ravens make it all the way to the AFC Championship game against the Patriots.  Smith showed his skill in that game, hauling in 3 receptions for 82 yards and a touchdown.  It was almost enough to carry the Ravens to the Super Bowl.  Almost.  They fell just shy, losing 23-20.  Smith was just 22 years old and his future seemed bright.  It seemed as if “happily ever after” had finally arrived for a young man who had been through so much.

In week 3 of the 2012 season, the Ravens had a dream matchup on their schedule.  They would square off at home against the New England Patriots in a Sunday Night prime time matchup.  Smith and company would have their opportunity to get revenge on the team that kept them out of the Super Bowl.

But then, tragedy struck.

The night before the game, Smith received news that his 19-yearold brother, Tevin Chris Jones, had been killed in a motorcycle accident.  In the middle of the night, Smith left Baltimore to be with his family.  While his teammates, coaches, and fans couldn’t blame him for leaving, the city of Baltimore was bracing themselves for an important game without their rising star receiver.

That day, Coach Harbaugh received a text message.  It was from Torrey Smith.  He would return for pre-game warmups and be ready to play.  Harbaugh said “If you’re around athletics, I guess you feel like it’s an escape, an opportunity to do what [Smith] does.  He’s been doing it his whole life; he knows what to do. When Torrey said he wanted to play, the decision was finished. He was going to get the opportunity to play, he deserved that.”

It couldn’t have been easy, but Smith played through the pain- and he played the game of his life.  He recorded 6 catches for 127 yards and 2 touchdowns.  It was just enough.  The Ravens won 31-30.  A few months later, the Ravens would get another matchup against the Patriots; this time in the AFC Championship.  The Ravens defeated New England for a second time that season, and would go on to win the Super Bowl.  He finally got his happy ending.

Smith knows that it was God who helped him through the difficult times in his life.  Now, he dedicates his life to helping others through difficult times and showing them that they can go to God for strength.  Smith said in “The Locker Room’s Binding Force;” I feel like it’s a part of my purpose.  If you knew all the things I’ve been through; I probably shouldn’t be sitting here in front of you.  And for me, I think it’s important that other kids know.”

Smith strives to be the one who lets them know.  He said that his purpose is to “go out and show people that He’s real.  And talk to them about it, because when I was young, you couldn’t tell me. [I was] like, ‘man, if God’s real, why is all of this happening to me?   If He loves me so much, why are we in this situation?’  That’s a real struggle for a lot of people.  And when you’re young and you’re growing in your faith, and you go to church because that’s what your mom told you to do; that’s kind of how I was living, so I can relate to them.  So, I can talk to them like, ‘hey man, this is just a storm.  This is just a trial.  It’s the first of many.  Just continue to stay steadfast;’”

In 1 Corinthians 15:58, Paul charges the people of Corinth with these words; my beloved brothers, be steadfast, immovable, always abounding in the work of the Lord, knowing that in the Lord you labor is not in vain.  Remaining steadfast in the Lord is a major focus of Smith’s walk with the Lord.  He says that being steadfast “is something that’s said a billion times in the Bible, which kind of hit home with me.  That’s what I try to do.  I’m not perfect.  I’m never gonna be perfect, actually.  But it’s something I try to grow and try to share that with the youth as well, when I have that opportunity.”

God gave Torrey Smith the strength he needed to remain steadfast in times of trouble.  He promises to do the same thing for us.  We can all live in God’s promise from Isaiah 41:10; fear not, for I am with you; be not dismayed, for I am your God; I will strengthen you, I will help you, I will uphold you with my righteous right hand.

Note: I strongly recommend watching “The Locker Room’s Binding Force” in its entirety.