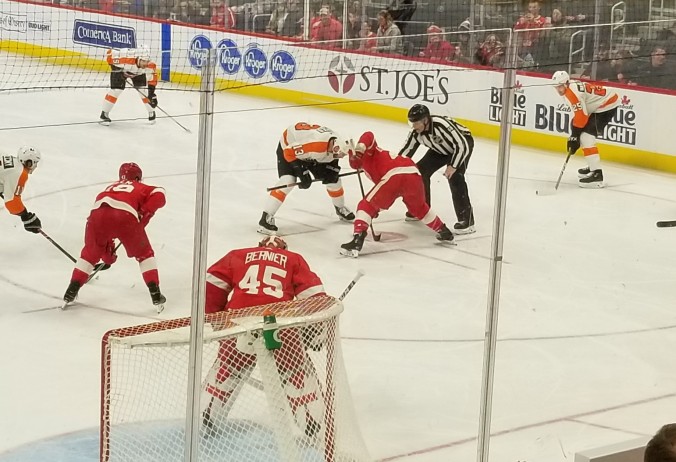 Luke Glendening takes a face off for the Detroit Red Wings on February 3, 2020 against Kevin Hayes of the Philadelphia Flyers

A high school football practice drill is an unlikely stage to set for the opening scene of a story about hockey.  But that’s where this story begins.  The school was Michigan’s Grand Rapids High.  The drill was a simple one.  A bruising linebacker was putting on a tackling clinic, repeatedly pounding a scrawny sophomore fullback into the dirt.  As coach Peter Stuursma watched it all unfold, the poor young linebacker didn’t stand a chance.

The fullback’s name was Luke Glendening.  Glendening had the pedigree of a football player.  His father, Tom, had been a starting fullback for Bowling Green in the early 80’s.  His mother, Leslie, had been a cheerleader at Bowling Green.  His brother, Joe, was an All-American running back at Michigan’s Hillsdale College.  If this particular practice drill proved anything it was that young Luke wasn’t ready to follow in his family’s footsteps.

What transpired at practice that day lit a fire in Glendening’s heart.  He hadn’t been one to spend any more time than necessary in the weight room.  After being dominated by someone bigger and stronger, he wasn’t going to let that happen again.  He began lifting almost religiously, rarely missing an opportunity to work out.

In no time, Glendening became a force to be reckoned with.  He would soon pave the way for his running backs, knocking opposing linebackers off of their feet the way his teammate had done to him during practice.  His running backs made the most of Glendening’s help.  Both backs; Kevin Grady, followed by his younger brother, Kelvin Grady, both had successful high school careers and later went on to play for the University of Michigan.  Grand Rapids High would follow Glendening’s lead towards the 2006 Division-III MHSAA State Championship, with Luke running for 98 yards and 2 touchdowns on a torn MCL in the championship game.

That’s not the game, however, that Stuursma remembers most.  For him, it was a game against Catholic Central.  Grand Rapids High had been driving and found themselves on the 1-yard line.  Kelvin Grady had led a fantastic drive, ripping off long run after long run, ultimately setting them up for an easy score.  In the huddle, the play call came in; a fullback dive for Glendening.   He hung his head in disgust in the huddle.  The ball was snapped.  Glendening dove into the end zone for the score.  He then made a beeline straight for the sidelines.   He and coach Stuursma got into a scuffle.  In Glendening’s mind, Grady had done the work and deserved the touchdown.  He was angry that the coach had let him get the glory instead.  That let an impression on the coach.  Stuursma told Steven Nesbitt of the Michigan Daily; “From that point on, it became more than a coach-player relationship, but more of a friendship.”

In spite of Luke’s success on the field, he had two problems.  First, few colleges made him any football offers.  His only offers came from Wheaton and Hope, two small Division III schools.  Second, although he was far more successful in football, hockey was his passion.  After graduating high school, he decided to put college off for a year in hopes that football offers might come the following recruiting season.  He moved away from his family to a Connecticut boarding school, called Hotchkiss.  He was told that Ivy League schools often sought their football players from nearby prep schools such as Hotchkiss, and that, if he had success there, he may be able to secure an offer.  At first, it seemed to go according to plan.  The University of Pennsylvania was impressed by Glendening and made him an offer.  The offer, however, was soon pulled.  Luke was crushed.  His dream of playing collegiate sports seemed to be dashed.  That winter, one man would change that.  The man’s name was Mac Bennett.

Mac Bennett was a defenseman for Hotchkiss’ hockey team.  Unlike Glendening, Bennett caught the eye of college recruiters.  During a game against rival Deerfield, the University of Michigan sent a scout named Billy Powers to scout out the defensemen.  Glendening had no idea he was there.  But that game, he scored two of his eight goals of the season.  Powers notice.

What stood out to Powers wasn’t really the two goals.  He was most impressed by Glendening’s toughness.  He would later recall noting that Glendening played hockey like a football player.  He skated with the explosiveness of a running back.  He hit like a linebacker.  He wasn’t going to get knocked down no matter how big the other player was.  Powers would soon make an offer to Mac Bennett, which provided him with the opportunity to also meet and speak with Glendening.  Suddenly, he went from having his dreams dashed to holding onto hope that he might possibly play for one of the premier hockey programs in the nation.

By the time the season had ended in February, Bennett had committed to the University of Michigan.  Glendening, though, still hadn’t received an offer.   In April, another star hockey player would change everything for Glendening; this time it was current Vegas Golden Night star, Max Pacioretty.

In April, Pacioretty, Michigan’s freshmen standout, signed a professional contract and would be leaving the school.  Powers finally gave Glendening the call he had been waiting for.

It wasn’t a scholarship offer.  Instead, it was an invitation for a one-year tryout.  Powers recalls telling Glendening “if you’re good and practice, you’ll stay.”  But he also warned him that it was unlikely that he’d get much of an opportunity.  He added; “if you have somewhere else to go, you should probably do it.”  He’d later recall; “I remember the conversation as plain as day.  You really don’t have many of those conversations with recruits. Usually, you’re telling kids that they have a guaranteed spot and that they’re going to be there for four years.  But I couldn’t in all confidence promise Luke that he had any chance at all to crack our lineup as a rookie. It was more of an opportunity for him to get in front of us every day. If he felt he could have an impact on us, then we could try and take him beyond one year.”

Luke Glendening joined the University of Michigan’s hockey team in 2008.  He was there mostly to serve as a backup option and to participate in practices.  There was one player on Michigan’s Hockey Team, though, who was making great impressions; a young man named Fleming.

Fleming had no first name.  His name wasn’t found on any official University of Michigan roster.  There’s no record that a “Fleming” even existed.  As former Michigan player Louis Caprusso would later recall, though, there was this young player named “Fleming” who impressed everyone.  Fleming’s play even caught the eye of coach Red Berenson; though Berenson himself didn’t even know the young man’s name.  Finally, Fleming spoke up.  He pointed out that his name wasn’t Fleming.  It was Glendening.  And he had a first name too!  Luke.

It wouldn’t take long before the entire College Hockey world knew the name Luke Glendening.  By his junior year, he was a regular in the Wolverine’s lineup.  Along with future NFL player, Carl Hagelin, he was considered a team leader and was named co-captain.  While he wasn’t necessarily the fastest skater or the top scorer, he was a favorite in the locker room.  He was considered a great teammate and wonderful example; the kind of person the other players wanted to be.

After graduating from the University of Michigan, Glendening went back home, suiting up for the Grand Rapids Griffins of the AHL – an affiliate of the Detroit Redwings – for the 2012-2013 season.  Glendening played with his patented toughness in the AHL and continue to impress nearly everyone who watched him play.  By the end of the 2013-2014 season was ending, he had been called up by the Red Wings, beginning what would soon become a long and successful career in the NHL.  Not bad for a college walk-on!

Glendening’s story is a tale of polar opposites.  He’s been a scrawny high school sophomore, getting routinely pummeled on the practice field.  He’s been a low-level football prospect, unable to secure even a division II offer.  He’s been a walk-on who only caught the attention of one college hockey scout.  On the other hand, Glendening’s list of accomplishments is also quite impressive: High School football champion, team captain, World Cup champion, and Stanley Cup winner are just a few of his highlights.  As his career goes on, Glendening has achieved much to brag about!

Boasting, however, is something you will rarely hear cross his lips.  He told Hockey Ministries International* that one of his favorite Bible passages is 2 Corinthians 12:9: But He said to me, ‘My grace is sufficient for you, for my power is made perfect in weakness.’ Therefore I will boast all the more gladly of my weaknesses, so that the power of Christ may rest upon me.

Glendening explains; This is a constant reminder that I’m broken and imperfect, but God can use people like me for His glory.  If He can use me, He can use anyone.  His grace is never-ending, His love is unfailing, and His faithfulness is unquestionable.  It’s not about me; it’s all about Him.  To have and serve a God like that is enough for me.

We all need to be reminded from time to time that life isn’t about us.  Glendening has spent his career being the best teammate he can be, raising up his fellow players and giving glory to God.  That’s what we’re called to do as Christians as well.

Our Lord and Savior, Jesus Christ, didn’t come to this earth to bring glory and honor to Himself.  Instead, He made Himself nothing for us; taking on the weight of our sin and carrying it to the cross.  He was beat, mocked, crucified, and killed for us.  He was knocked down so that we could be lifted up!  Everything that Jesus did, He did – not for His own benefit – but to save us from sin and death.  Because Jesus has done everything necessary for us, we’re free to live our lives in a way that gives all glory to Him!  As Glendening says; it’s not about me; it’s all about Him!