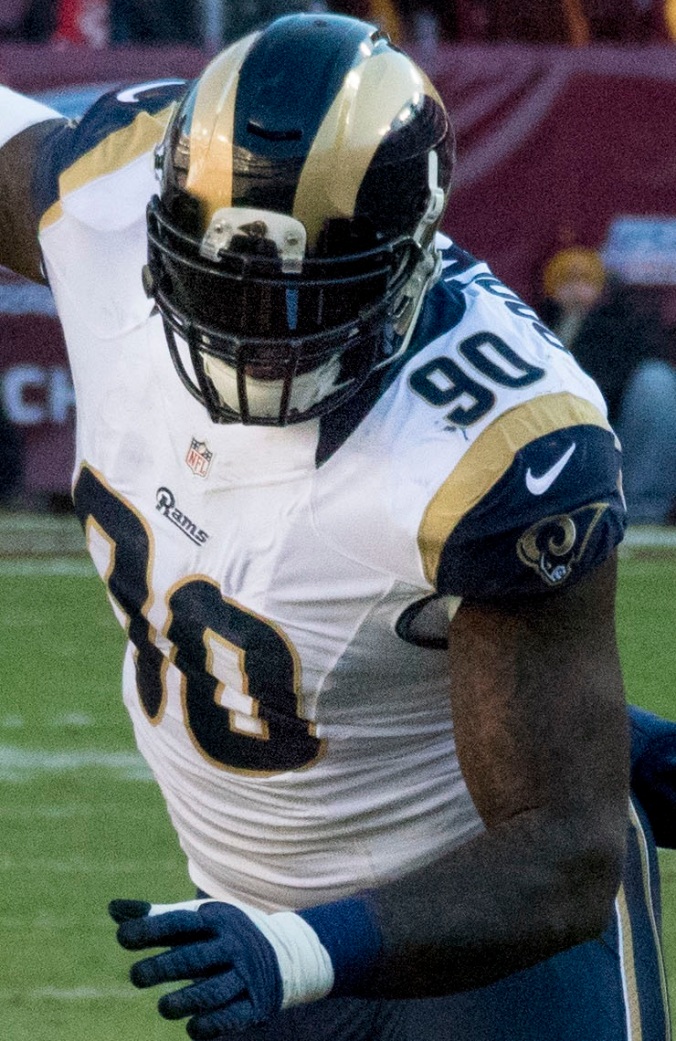 Though there are many variations of the phrase, you have often heard it said; “Behind every successful man is a strong woman.”  Whether it was a mother, a wife, or another caring, supportive woman, this phrase rings true to many.  Los Angeles Rams defensive lineman, Michael Brokers, is no exception.

Brockers is a 7-year NFL veteran, having spent each of them with the Rams (initially in St. Louis).  He’s a team leader on the defense and man whom many of the younger players look up to.  Rookie John Franklin Myers shared his thoughts regarding Brockers to Gary Klein of the Los Angeles Times; “Usually, after meetings, he has two pages of notes of what he needs to do better for that day.  That’s a guy you look up to – how can you be like him.”  Fellow rookie, Sebastian Joseph-Day added; “Every time I ask him for some advice, he’s always been open and always getting extra work with me.  They’ve got me playing multiple positions, and he’s helped me develop.”

Coach Sean McVey calls Brockers “one of the more underrated players” in the NFL, noting not only his strength but also his presence.  He says of Brockers; “Anybody that knows Michael knows he’s got a great personality where you can’t help but kind of be in a good mood when you’re around him.  He’s got that contagious enthusiasm in a positive way that rubs off on his teammates. … He knows the influence that he has.”

When asked about his dedication to helping young players succeed, Brockers responded with the humility that he demonstrates on so many occasions; “Just trying to help those guys get up to speed, because that’s what I feel it should be about – giving back and helping somebody else grow their game.”

Brockers is an exciting player, a leader in the locker room; a man of devoted faith and excellent character.  In so many ways, Michael Brockers is a successful man.

Behind him is a strong woman; his wife, Faith.

Faith is a devoted mother of two, a blogger, the host of a podcast on woman’s issues, and a dedicated woman of faith.  Her father was a Baptist minister, who taught her – and her brothers Isaiah and Jeremiah, about the Lord.  Her father, however, died when she was 13, leaving her struggling with her faith.  It wasn’t until her first year of marriage that she began to take her walk with the Lord seriously again.

Even after recommitting herself to the Lord, however, she still had her struggles.  She writes;

“I always knew I wanted to start a family, however upon attempting to do so my dreams were soon crushed. The day after my wedding, I soon started to prepare to be a mother. However, a year and a half in, my husband and I were shocked with the news that one fallopian tube was blocked and the other being partially blocked (meaning it would be extremely difficult to have children). Though I was devastated by the news we still needed answers so we sought out a fertility doctor whom recommended IVF. During this emotionally and physically draining process I prayed to God to bless my womb and pondered on the scripture about Sarah in 1 Samuel 1:27, also I was reading Psalms 113:9 daily. It gave me such peace and trust in my Lord that all my prayers would be answered. Sure enough, three months later we conceived our daughter through in vitro fertilization. My husband and I were so thankful to God for trusting us with this precious gift, August 2015 we welcomed our baby girl. Just seven months after the birth of our daughter we found out we had naturally conceived our second child. I have to admit at first I was extremely nervous because it was an unplanned pregnancy. I now realize that nothing is unplanned with God, & now I take pride in carrying my baby boy. When man said it was unlikely, God said other wise. Oh the blessings my God has given to me — I am so very thankful and am joyful that He is a merciful God who loves me so much.”

Faith calls Psalm 139:14 her favorite Bible verse; I praise you, for I am fearfully and wonderfully made; wonderful are your works, and my soul knows it very well.  She explains;

This scripture resonates deep, because though it took me my whole childhood I now know that I am made in His likeness and that I am fearfully and wonderfully made. I am a black woman of a darker skin tone and my whole childhood I was mocked and teased for it to where I too believed I was not beautiful because I was “too dark.” Today I revert back to this scripture often when I need reassurance, peace or to thank God for bringing me so far in life through my many storms. His works are indeed wonderful and marvelous. I thank Him for not only healing all my emotional scars but also sending me a Godly man who loves me with all of my flaws. Additionally he lives by the Bible as a priest over our household and loves his family just as Christ loved the church. My God is truly an amazing God!”

As we watch the Los Angeles Rams take on the New England Patriots in Super Bowl LIII, we see a great deal of successful men on the field.  We give thanks to God for the many faithful women who helped them get there!