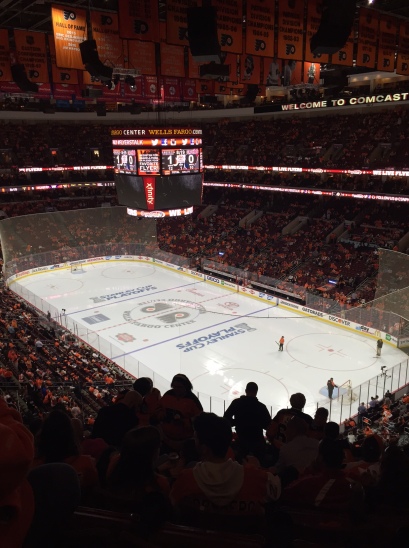 A view of the Wells Fargo Center, home of the Philadelphia Flyers. Photo by Nfled

As the 2020 NHL trade deadline approached, the Philadelphia Flyers made two moves.

First they traded a 5th Round draft pick to the Montreal Canadiens for center Nate Thompson. This type of move was long-expected, as the Flyers were known to be looking to add experience and scoring, and look to improve their odds on face-offs. The Flyers didn’t have many glaring holes to fill, so they weren’t expected to make any major moves; their 4th line center, Connor Bunneman was the only likely candidate to be replaced, as he was widely expected to return to the AHL for further seasoning. While Bunneman has played relatively well for the Flyers, the 21-year old had not picked up a point in 14 games in the NHL. Replacing Bunneman with Thompson all made perfect sense. But then, the Flyers made another move, trading Kyle Criscuolo and a 4th round pick to the Anaheim Ducks for another center, Derek Grant.

Throughout the month of February, the Flyers had been among the hottest teams in the NHL. They had transformed from a team on the outside of the playoff bubble looking in, all the way up to 2nd place in the Metropolitan Division. The entire team has been playing well and there were no obvious candidates to move to make way for Grant.

The odd man out turned out to be Joel Farabee.

Farabee has enjoyed a successful start to his career. He starred for Team USA in the U18 world championships, helping lead them to the gold in 2017 and the silver in 2018. In 2018, he was selected 14th overall in the draft by the Flyers. In 2019, He played at Boston University, scoring 17 goals. In July, he was ranked as Flyers top overall prospect by many pundits, including Dan Silver of Philly Is Flyer. Following the season, he signed his first NHL contract with the Flyers.

By most measures, Farabee’s 2019-2020 season has been a successful one. In 49 games with the Flyers, he has scored 20 points, including 7 goals, while being limited to an average of 14:13 on the ice per game. After an understandable adjustment period, Farabee has been especially good as of late, gaining 8 of his 20 points the 11 games leading up to his demotion, inluding a 2-goal effort on February 1 against the Colorado Avalanche.

Certainly, Farabee will be back with the Flyers soon. The outlook on his future shines no less brightly in spite the demotion. Yet one still wonders how a young man who just turned 20-years old will handle the setback.

Farabee will rely on his faith.

He explained to Julie Robenhymer of Elite Prospects; “I wasn’t really into religion growing up. Playing hockey didn’t leave me with a lot of time to go to church. But I’ve always believed in God and when I had the opportunity to learn more and was invited to join this Bible study when I was at the [US National Team Development Program] and grow in my faith and closer to my teammates and learn how to express feelings that a lot of athletes don’t always know how to express, I think it was really good for me as a person. When times are tough, it’s always good to have God to look at and help you through things.”

As he studied the scriptures with his teammates, Farabee found a verse which he knew he would need to rely on later. That verse is James 1:12: Blessed is the man who remains steadfast under trial, for when he has stood the test he will receive the crown of life, which God has promised to those who love him. Confident that such trials would soon come, Farabee got the verse tattooed to his wrist to serve as reminder of God’s promises.

He explained to Robenhymer; “You don’t make it to the NHL without going through some adversity and you definitely don’t stay there without it either. Going through the struggle and putting in the work to go after my dream is something I signed up for. I know it’s going to be hard, but I also know it will be worth it. That’s why I got it.”

He added to Ed Barkowitz Philadelphia Inquieror; “The part at the end was the most important part for me: that those will receive the crown of life are those that love the Lord,” he said. “That’s the biggest part. Because, you know, whatever happens, as long as you love God and have faith, everything will sort itself out… Everyone goes through some tough times and stuff. It’s part of life, but just having that faith, at least for me, it helps to have something to believe in other than what I can physically see.”

Farabee’s stay in the AHL may not last very long. Flyer’s General Manager, Chuck Fletcher, said that he plans on keeping Farabee on speed dial, just in case. He explained “I just want to make sure we are giving Joel every opportunity to be the player he can become. He’s played fine, and I have no doubt that he will be part of our group again, maybe in the near future.”

While he waits for that phone call, Farabee’s faith will sustain him.

It turns out that GM Chuck Fletcher wasn’t kidding when he said he would keep Farabee’s number on speed dial. On March 4th, James van Riemsdyk suffered a broken hand during the Flyers 5-2 win over the 1st place Washington Capitals. The next day, Farabee was recalled from Lehigh Valley to tale his place – only 10 days after his initial demotion. Farabee made his presence felt quickly, scoring a late goal in the Flyers 3-1 victory over the Buffalo Sabres on March 7, helping secure the Flyers 9th consecutive victory.